Former Brazilian President Luiz Inácio Lula da Silva released an open letter to evangelicals on Wednesday aimed at countering claims that he persecutes their faith and winning votes among a large and growing section of the population.

The letter, read at a rally with evangelical leaders at a Sao Paulo hotel, promised he would respect religious freedoms if elected – as he did during his 2003-2010 presidency.

“We live in a time when lies are being used extensively in an effort to instill fear in people of good faith, alienating them from a candidacy that further defends them,” the letter reads. “That’s why I felt the need to reaffirm my commitment to religious freedom in our country.”

Polls have shown da Silva losing support among evangelicals this year as incumbent Jair Bolsonaro and his allies have warned the former president is backing left-wing authoritarians who have persecuted Christians elsewhere.

They literally demonized da Silva and his Workers’ Party at times, prompting him to issue a bizarre statement this month denying he ever conversed or dealt with the devil.

Da Silva dominated the first round of presidential voting, dropping less than two percentage points from an outright victory. Most polls show da Silva maintaining a lead heading into the Oct. 30 second round, but Bolsonaro has been gaining ground in recent weeks.

Da Silva’s letter to evangelicals is reminiscent of one he published as a candidate in 2002 to reassure financial markets that he posed no threat. It calmed the anxiety at the time and helped the former left-wing labor leader win the presidency.

During his first year in office, he signed into law a bill authorizing the creation of private religious organizations, with widespread support from evangelicals. He characterized this act as having enshrined the right to religious freedom.

Self-described evangelicals make up nearly a third of Brazil’s population, more than double their share two decades ago. Demographer José Eustáquio Diniz Alves, a former researcher at the National School of Statistical Sciences, predicts that they will approach 40% by 2032, surpassing Catholics.

Bolsonaro is Catholic, but his wife Michelle is a devout evangelical. After shunning the spotlight for most of her husband’s presidency, she emerged during the campaign as the leading evangelical voice in Bolsonaro’s camp. She said that before her presidency, the presidential palace was dedicated to demons.

Bolsonaro’s campaign has insisted that da Silva will promote a gender-based policy and ease restrictions on abortion rejected by many evangelicals. Da Silva said in April that women should have access to abortion, then backtracked somewhat to say he personally opposed it.

Some of Brazil’s most popular evangelical pastors have also campaigned for Bolsonaro, as they did four years ago when they helped him to victory. Polls indicate that Catholics, meanwhile, largely support da Silva, who is himself a Catholic. 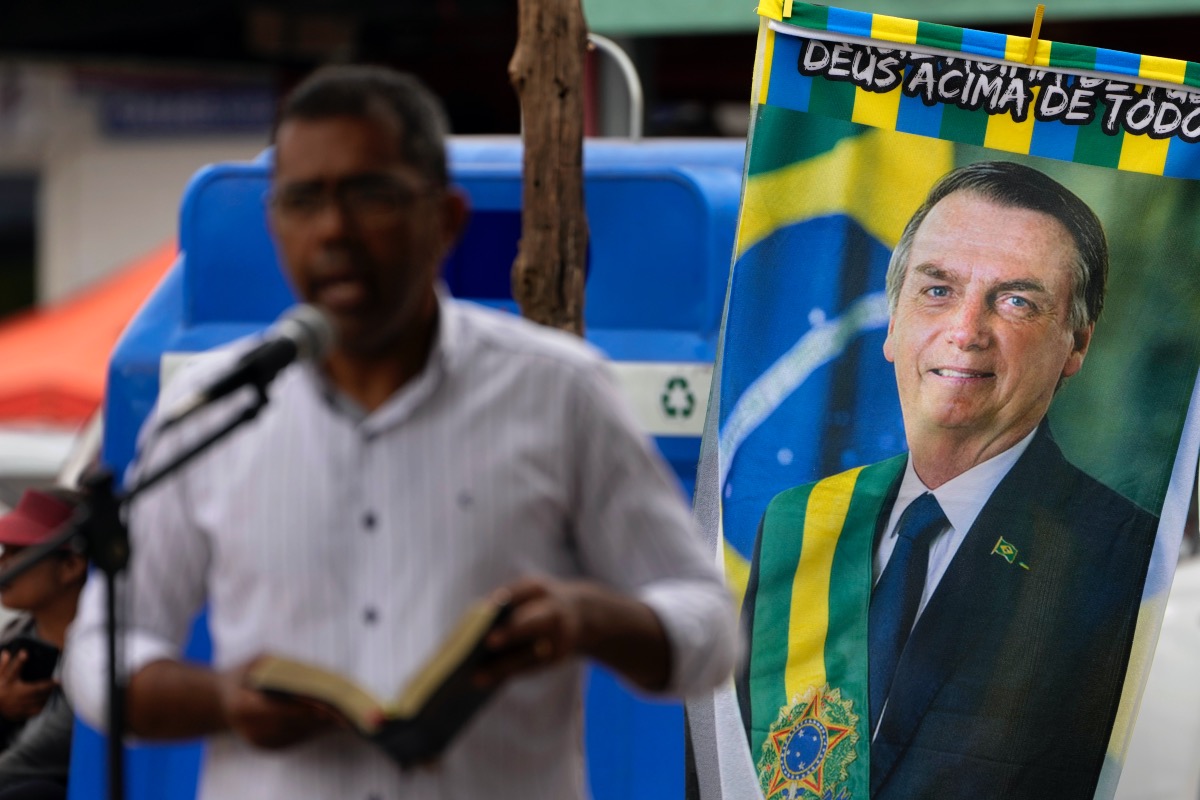 An evangelical pastor reads a Bible against the background of a napkin adorned with an image of Brazilian President Jair Bolsonaro, a candidate for re-election, offered for sale by a street vendor, in Brasilia, Brazil, on September 22. Polls show Bolsonaro with overwhelming support from evangelicals ahead of the October 30 presidential run-off. PHOTO: AP Photo/Eraldo Peres/File Photo.

Da Silva said in his letter that many evangelicals face what he calls “Bolsonaro’s use of faith for electoral purposes.”

“My administration will never use the symbols of your faith for partisan political purposes, respecting the laws and traditions that separate state and church, so there is no political interference in the practice of the faith. “said the former president. “The attempt to use faith politically to divide Brazilians does not help anyone.”

Former environment minister Marina Silva, an evangelical who recently restored her support for da Silva after a public falling out years ago, said at the event that she would rather “belong to a persecuted church rather than to a persecuting church”.