While filmmaker Yelena Popovic – director of Man of God, a film about the life of the Orthodox saint Nektarios of Aegina – says her Orthodox faith played “a big role in my life”, she had never thought of making a film about a saint. Not before, that is, she traveled to Serbia in 2012 to attend a memorial for her father who died the year before and visited a bookstore in Belgrade where she spotted a book on St Nektarios.

“I had heard of him, of course,” she said, addressing Seen from Greece. “I remember hearing about him in Arizona – I used to live in Los Angeles and often went to that monastery, St Anthony the Great in Arizona. A lot of people said to me ‘Oh, have you ever heard of St Nektarios, he’s amazing, you should read about him.’ So when I saw a book about him, it was a perfect moment. I bought the book thinking ‘Perfect, now I’m going to read about it [after] I had heard of him, since it’s a long trip back to Los Angeles.

St Nektarios’ life, as depicted in the film, was characterized by his perseverance in the midst of persecution and suffering as well as his love for the oppressed. Appointed Metropolitan Bishop of the Greek Orthodox Church in 1889, he later endured being defrocked and expelled from where he ministered in Alexandria after his popularity among the people caused the jealousy of other clergy. . Returning to Greece, Nektarios was shunned by church authorities and spent his time continuing to minister among the poor and marginalized before finally being able to obtain a position as director of a school for priests in Athens.

Nektarios, who also wrote many books, went on to found a women’s monastery on the island of Aegina and again faced the wrath of church officials for doing so. He eventually retired there to live out the rest of his life as a monk, his ministry to others continuing even as he himself faced illness in the final days before his death in November 1920. Nektarios was officially recognized as a saint by the Ecumenical Church. Patriarchate of Constantinople in 1961.

“St Nektarios’ life was one of unjust prosecution; he was one who…was unjustly slandered…He was a priest of his people, he was one who truly lived what he was preaching.”

Popovic recalls the impact she had on the story of St Nektarios when she read it on the plane, especially because of the parallels she drew between her life and that of her father who was very much in his thoughts at the time.

While her father was not religious, Popovic – who was unable to attend his funeral in 2011 due to her US immigration status (she is now a US citizen), describes her father as a ” righteous man, an honorable man” who was not willing to do anything unethical to advance his career. Working as a civil engineer in what was then Yugoslavia, he became what she calls “a thorn in the side of those in power”, a position that eventually cost him his job and saw him then work in a much lower position.

“He was a very humble man and I remember he was always criticized for that…by his family and the people around him – that…maybe he didn’t need ‘to be so fair and honest,'” recalls Popovic, whom she says she remembers admiring her father for those same qualities.

“[W]hen I read this book… it really struck a chord. St Nektarios’ life was an unjust pursuit; he was someone who…was unjustly slandered…He was a priest of his people, he was someone who really lived what he preached.

“I was amazed at his humility, his ability to forgive, to surrender his life to Christ and to basically imitate the life of Christ and to take up his cross and follow Jesus through what he did. felt it was a great story to tell and something that I had a lot of personal understanding on so many levels. And that’s when I felt I had to embark on this journey…” 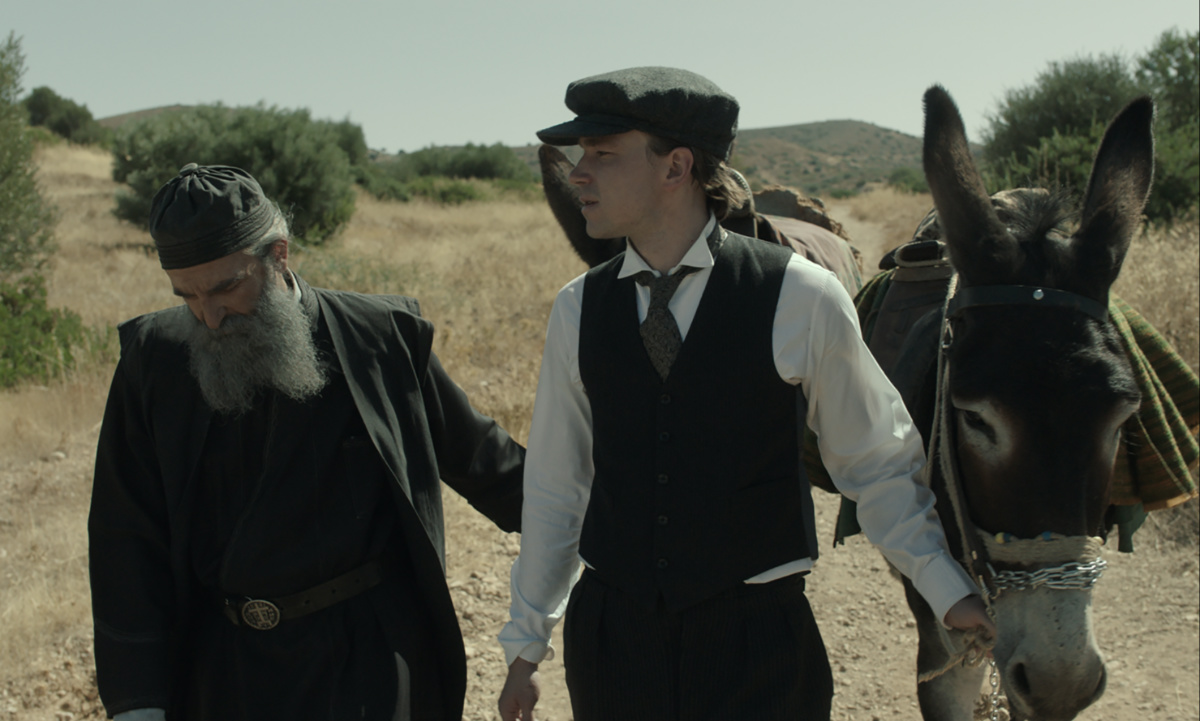 Aris Servetalis as Nektarios with Alexander Petrovas his friend and assistant Kostas in a scene from Man of God.

man of god, which is out in Australia and New Zealand this week following its release in Greece in 2021 and the US earlier this year, stars Greek actor Aris Servetalis as Nektarios with Russian actor Alexander Petrov playing his friend and assistant Kostas. Hollywood mainstay Mickey Rourke makes a cameo in a few scenes near the end of the film (more on that in a bit).

Popovic, who also wrote and co-produced the film, says she wanted to make man of god – which was filmed in Athens and on the island of Aegina – “as human as possible” in particular because of its religious theme.

“I wanted it to be as human and honest as possible so everyone could see this movie,” she says. “Obviously the main audience will be the faith-based audience – that’s the audience that I believe is looking for films… like these. But also, it has the potential to move into mainstream because, as I have seen so far with people who are not religious, they are really glad to have seen the film. It seems to have a healing effect; it helps people in times of trouble or difficulties. Because, in one way or another we all have suffering, we cannot avoid suffering in this world and it is how we deal with it that ultimately determines how we will get through this life.

Reflecting the themes of the film, man of god is a slow-paced film and features a saturated color palette.

“Her story is not a pretty story – it’s a beautiful story because it is inspiring and gives hope – but her life has not been easy, it has been very difficult.”

Popovic says the film was also made in a tighter aspect ratio than would typically be the case because “I didn’t want people to focus so much on the environment and look at it from the outside.”

Popovic believes the life of St Nektarios has something to say in people’s lives today, just as they did when he was alive.

“I think so – today even more so. Because today we live in a world where humility is completely forgotten, perhaps even perceived as a weakness. We live in a society where… no one takes responsibility for anything – it’s always someone else’s fault and that seems to be the prevailing teaching in society: that you just have to believe itself and that it is never his fault. Well, what happens is that instead of getting strong, you actually get extremely weak…[because] when you lose humility, you lose the ability to draw near to God and you lose the ability to then earn that peace that Christ has given us…”

Mickey Rourke, star of Hollywood films whose 9½ Weeks, Barfly, Year of the Dragon and The wrestler who also had a career as a professional boxer and whose behavior on and off set has occasionally been tabloid fodder, makes an appearance near the end of the film where he plays a paralyzed man.

Popovic says she “went after” Rourke for the role, in part because of his strong personal faith and the depth he could bring to the character.

“He had all the right elements for this role,” she says. “You needed someone…to be extremely believable in that particular role. This is him at his best I think, even if there aren’t too many scenes. 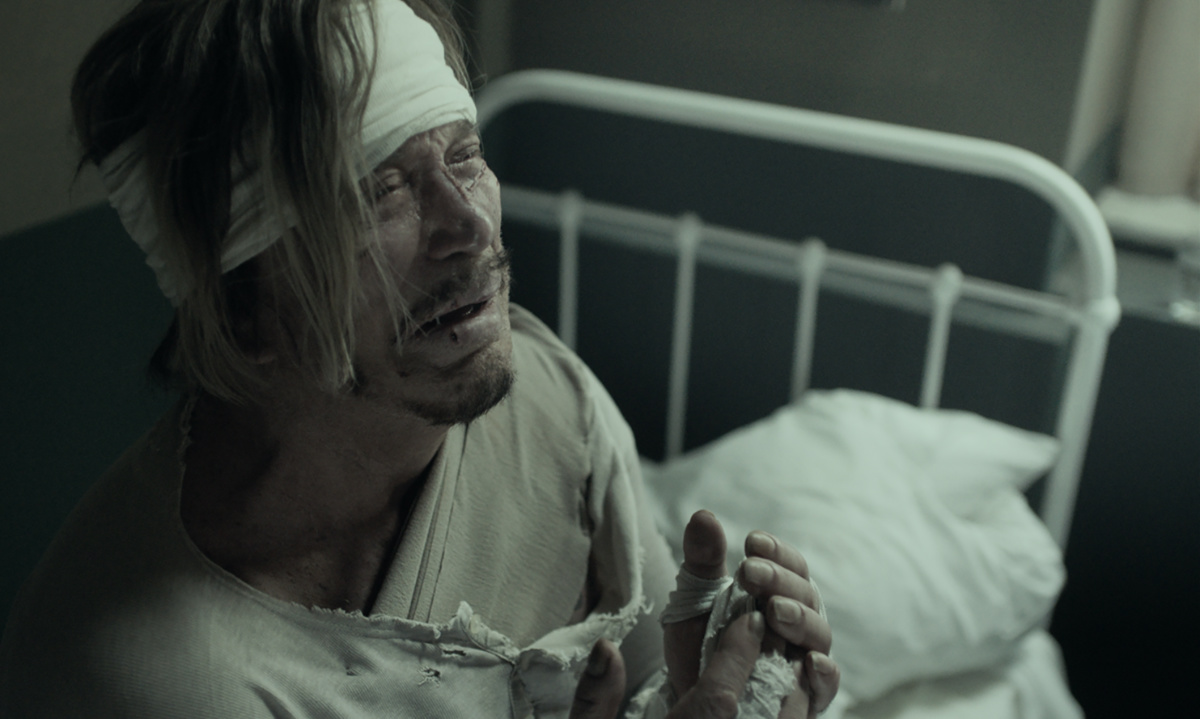 Mickey Rourke who plays a paralyzed man in Man of God.

Popovic says ensuring the film accurately reflects the life of St Nektarios was an “enormous responsibility” given the esteem in which he is held among many people of the Orthodox faith, particularly within the Greek Orthodox community.

“I wouldn’t have dared step into this arena if I didn’t have this personal understanding of the story,” she says, adding that there was genuine “love on set.” “[T]Most people were really doing it because they believed in the project, so there was this really good energy.

This authenticity was put to the test in January 2021, when the film was shown to 150 monks living in a Greek Orthodox monastery on Mount Athos (the monastery was a partner in the production of the film).

“If I can pass this test – get the film shown at Mount Athos in Greece; if they’re okay with that, that means I’m fine, I didn’t do anything crazy. So, yes, they really loved it and it was very beautiful and I felt more confident after that.

The movie would go on to become the most-watched movie in Greece in 2021.

“He was the people’s priest and people loved the movie, so it kind of goes together.”

As for the sequel, Popovic says she would like to make a film about the life of the third-century Ethiopian saint St Moses.

“It’s something that’s in development,” she said. “I would like to make a film about it… It’s a beautiful story of repentance – [he’s] a murderer and a thief, a gang member who basically [repented] and became a martyr.

“Man of God” hits select cinemas in Australia and New Zealand on June 2. For a list of participating theaters, go to www.movieschangepeople.com/in-cinemas/man-of-god.