The vast blanket of white sand overlooking Salvador is a great place to escape noisy traffic, phone calls, and crying children. A space to find solitude and, increasingly, God.

Evangelicals have been converging on the massive Abaete dune system for about 25 years, but especially lately, with thousands now coming every week to sing, pray and enter trance states. A few prayers scribbled on pieces of burning paper.

“I never tire of coming here and glorifying,” said Deja Soares, 47, adding that she has seen the paralyzed walk and the blind see. “The things God is doing here are amazing.”

Members of the Medaberel Baptist Church hike to the top of an area of ​​the Abaete dune system, arriving at a steep rise of sand they call the “Sacred Mountain”, in Salvador, Brazil, Sunday, September 18. PHOTO: AP Photo/Rodrigo Abd.

This year, the dunes became a flashpoint after the town hall began building a plaza and visitor center at a spot along their base, with a stairway on the sand soon to follow. A future phase would involve a platform at the top of the plateau. Proponents of the project say it is necessary to protect the fragile dunes from increasingly heavy foot traffic.

But it has come under fire from Afro-Brazilian religious groups, who have been practicing their own rituals in the dunes for generations and protesting against what they see as elected officials abusing their power to co-opt and Christianize another public space. They say their objections reflect the growing influence of evangelicals in the country’s corridors of power and that the politics are straining interfaith relations ahead of the Oct. 2 general election.

This year, the dunes became a flashpoint after the town hall began building a plaza and visitor center at a spot along their base, with a stairway on the sand soon to follow. Proponents of the project say it is necessary to protect the fragile dunes from increasingly heavy foot traffic. But it has come under fire from Afro-Brazilian religious groups, who have been practicing their own rituals in the dunes for generations and protesting against what they see as elected officials abusing their power to co-opt and Christianize another public space.

Although Catholicism is still the most widespread religion in Brazil, in recent years it has fallen below 50% of the population to lose its status as the majority religion and is expected to be overtaken by evangelical churches in a decade.

This year, nearly 500 evangelical pastors are running for state and federal legislatures, more than triple the number in 2014, according to data from political analyst Bruno Carazza. Sóstenes Cavalcante, leader of the Evangelical Congressional Caucus, told AP he believed they could win a third of the seats in the Lower House, which is their share of the population.

The rise of political power has sometimes altered the dynamics of public space nationwide, including in the state of Bahia, whose capital is Salvador.

A mayor in Bahia recently symbolically granted the key to the city to God and submitted all other spiritual entities to Christ. Another in the Salvador metropolitan area renamed a market “Jeová Jireh”, which means “The Lord will provide”, and vendors selling specialty goods to members of Afro-Brazilian faiths were reportedly barred from getting stalls. The Bahia State Legislature was adorned with a 30-foot panel featuring a Bible and the Ark of the Covenant.

“There is a project of contesting territory and power that is already in progress,” said Lívia Sant’Anna Vaz, a state prosecutor specializing in human rights discrimination. 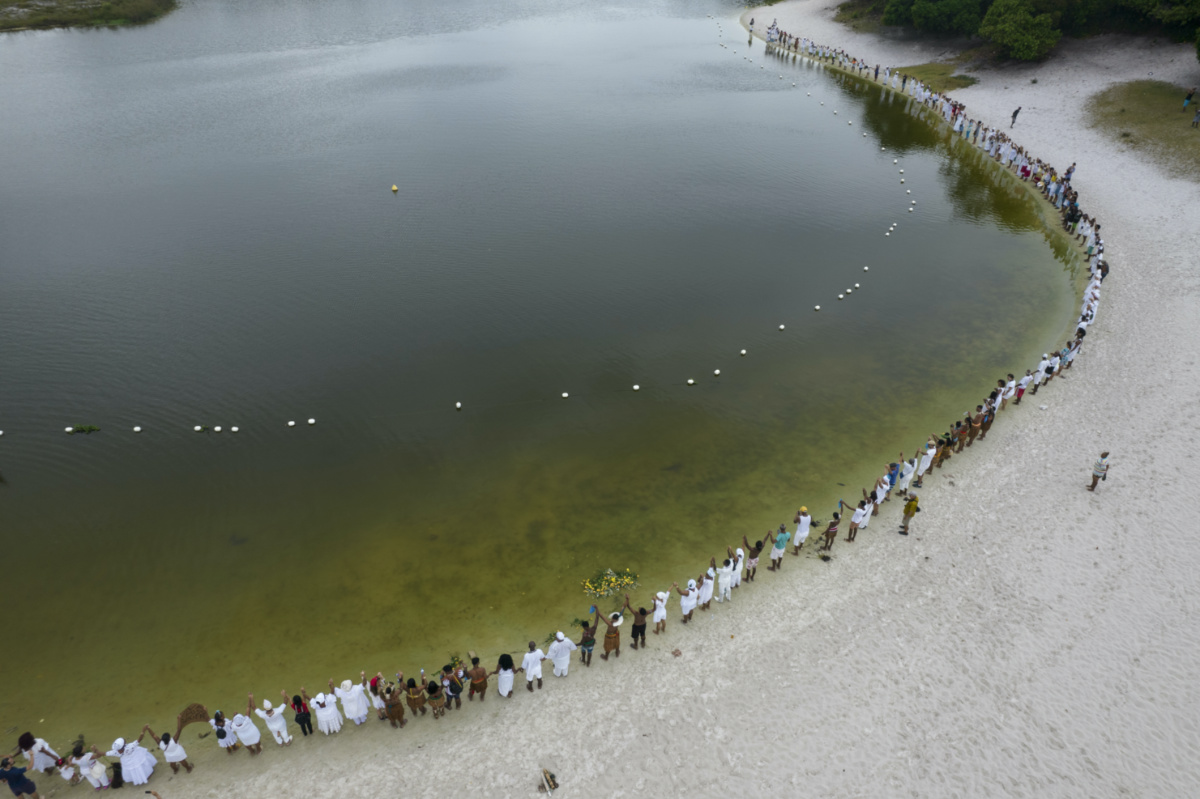 Practitioners of Afro-Brazilian faiths gather around Abaete Lagoon during a protest calling on authorities to take action against a series of environmental violations in the Abaete dune system, an area they consider as sacred, in Salvador, Brazil, on Sunday, September 18. Dressed in white, they walked to the lagoon, the traditional site of most of their rituals, and lined up along the water in a symbolic embrace for the region. PHOTO: AP Photo/Rodrigo Abd.

It is in this context that the dunes project was enlightened by an evangelical pastor who held the position of infrastructure secretary. Workers are working day and night to complete it this month.

On September 18, around 200 evangelicals made a four-hour pilgrimage to the site, some barefoot as they traversed the streets of Salvador to arrive at the steep, sandy climb they call the ‘Holy Mountain’.

Dressed in flowing white garments, they faced the city and raised their hands as Bishop Wedson Tavares prayed for God to influence the election. With the flags of Brazil and Israel in his shaking fists, he blessed elected officials from city councilors to President Jair Bolsonaro – a staunch supporter of evangelical interests – and pleaded for his re-election.

“Take control, in the name of Jesus, of this country, that your people may be happy! said the bishop, kneeling down with his eyes closed. “Because your word says that when the just rules, the people rejoice!”

Shows like this have convinced Jaciara Ribeiro, a priestess of the Afro-Brazilian Candomble faith, who has always faced repression in Salvador, that the public works project is a ploy for electoral support for evangelicals.

“It’s a political concession,” she said. “They build based on partisan politics. Doing this ‘Holy Mountain’ is for evangelical voting. That’s it.”

She used to climb this dune to collect barbatimão leaves for rituals honoring the deity Oxalá, but lately she has started to avoid it. Members of her nearby temple were insulted as they walked past or had Bibles held up to them, she said. 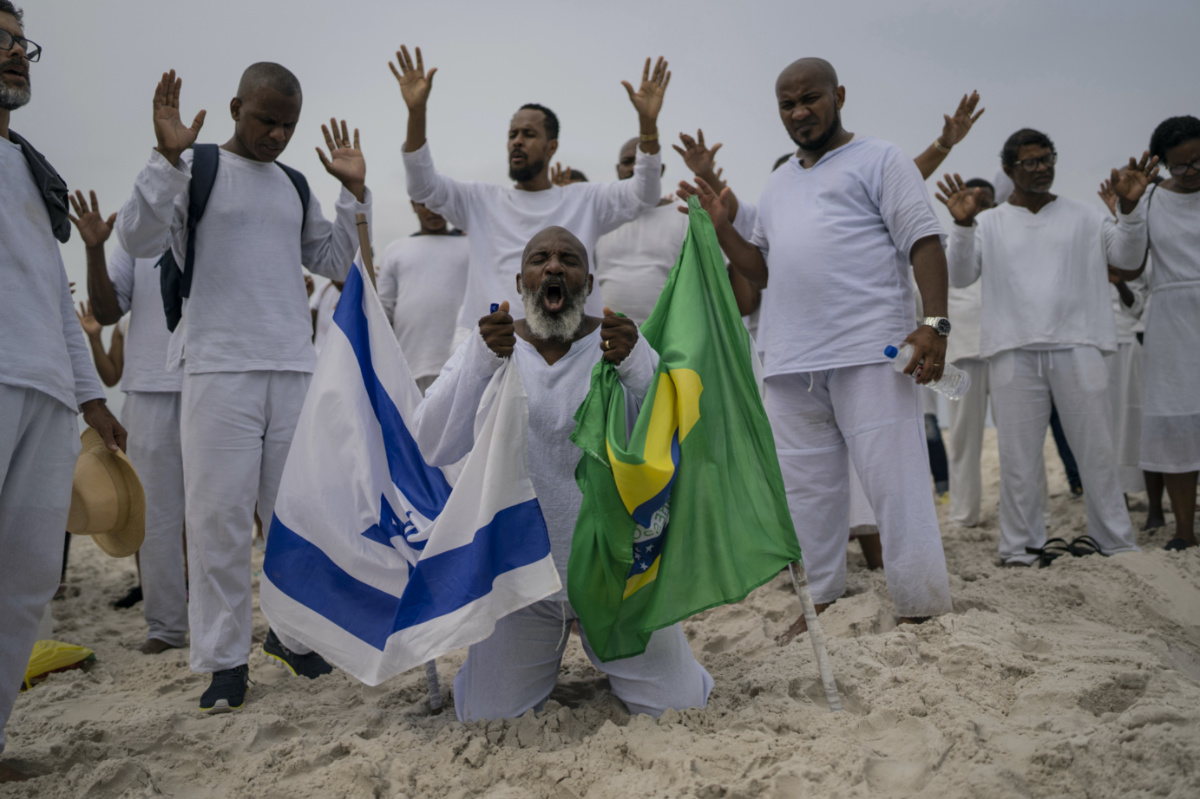 Baptist Bishop Wedson Tavares holds the flags of Brazil and Israel as he blesses elected councilors to President Jair Bolsonaro in an area of ​​the Abaete dune system during a steep rise in sand that evangelicals call the “sacred mountain,” in Salvador, Brazil, on Sunday, September 18. PHOTO: AP Photo/Rodrigo Abd.

Roque Soares, director of a non-profit environmental organization that helped develop the project, denied that politics was involved and said the aim was to prevent crowds from eroding the dunes and their provide bathrooms.

The dunes are personal to Soares, who is also an evangelical pastor and police detective. Decades ago, he went there to smoke marijuana, sleep with women and hunt birds. After his conversion, he says, it was there that the Lord healed four hernias that doctors said would require surgery.

“I started coming here with another perspective, to seek the presence of God,” said Soares, 53. “I found many different people from different faiths, from different parts of our city and from within our state.”

The area affected by the project is only a small part of the vast dune system. Soares noted that there was no opposition until an evangelical pastor and city councilman introduced a bill to officially name the location “Holy Mountain The Lord Will Provide.”

While the backlash forced the withdrawal of that proposal, evangelicals still call the area “Holy Mountain” — as does the mayor. At a packed meeting inside the Salvador Convention Center, he told hundreds of enthusiastic Christians that he was building the “Holy Mountain” so they could demonstrate their faith. Then a bishop from one of Brazil’s largest evangelical churches called four legislative candidates to the stage and asked the crowd to vote for them.

Amid the row, several “Holy Mountain” signs put up by Roque’s nonprofit were damaged, and some evangelicals blame members of Afro-Brazilian faiths as responsible.

In mid-September, Ribeiro, known as Mother Jaciara of Oxum, learned that the Federal Public Defenders Office had filed a lawsuit to suspend the project. She took this as a sign that the deity Oxum had heard their pleas, and she wanted to go there to celebrate. But she worried that members of her temple would be afraid to join, intimidated by the gospel presence.

“They have an army of God. I wish I had an army of Oxum, she said with a wink. 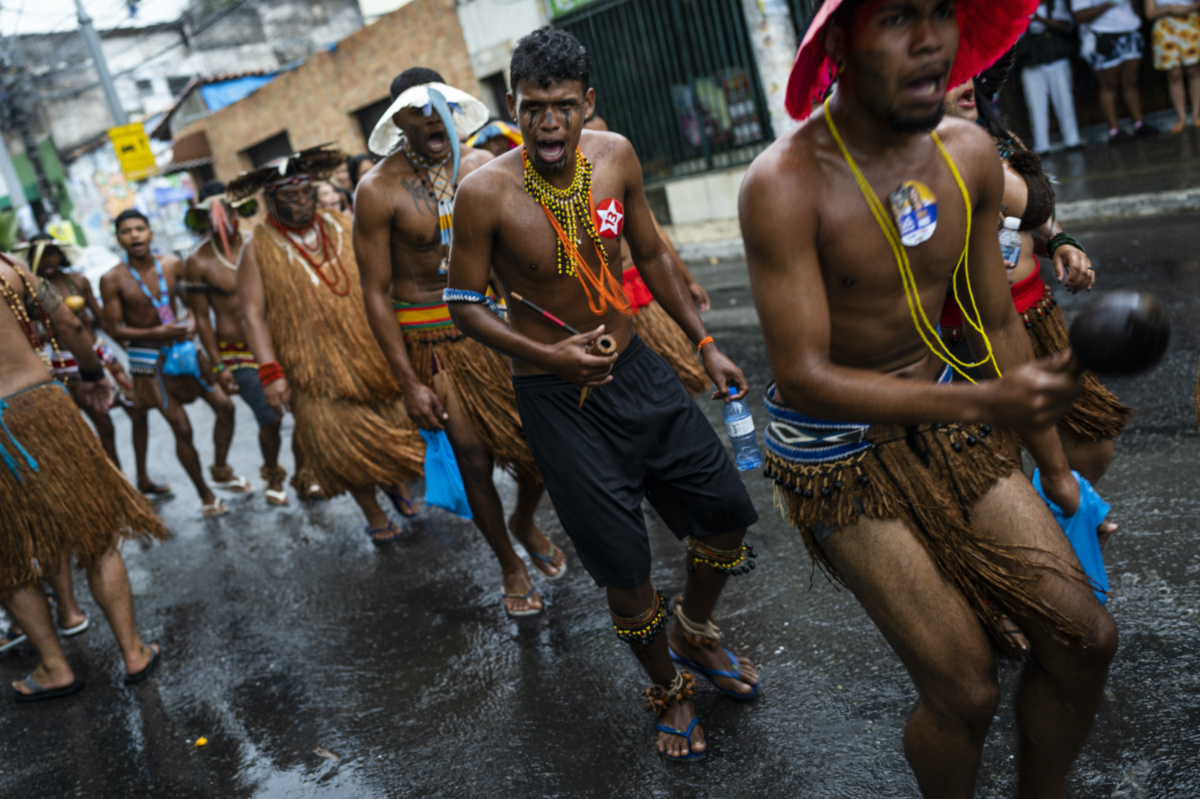 Members of the indigenous community join members of the Afro-Brazilian community in a protest march, in Salvador, Brazil, on Sunday, September 18. Protesters called on authorities to take action against projects that would have an environmental impact on the dunes, including one to accommodate evangelical pilgrims gathering in the Abaete dune system, an area that members of Afro-Brazilian faiths regard as sacred. PHOTO: AP Photo/Rodrigo Abd.

Forces rallied soon enough, and practitioners of Afro-Brazilian religions gathered days later to protest the project and other measures seen as environmental assaults on the dunes.

Dressed in white, they marched to the Abaete Lagoon, the traditional site in the dunes for most of their rituals, and lined up along the water in a symbolic embrace for the region.

From a sound truck, a Candomble priestess urged people to political action. Many carried stickers supporting leftist legislative candidates, at least two of whom were present, and former President Luiz Inácio Lula da Silva, who is running against Bolsonaro.

At the edge of the lagoon, an evangelical pastor called three church members into the water to be baptized, dipping their heads below the surface and then hugging them tightly.

The pastor, Edy Santos, said afterwards that he was not bothered by the continuous drumming of the protest and that he refused to discuss politics with his flock, even when asked.

“Our country is totally divided. It’s a division of thoughts,” Santos, 32, said. “And the church has come to unite.